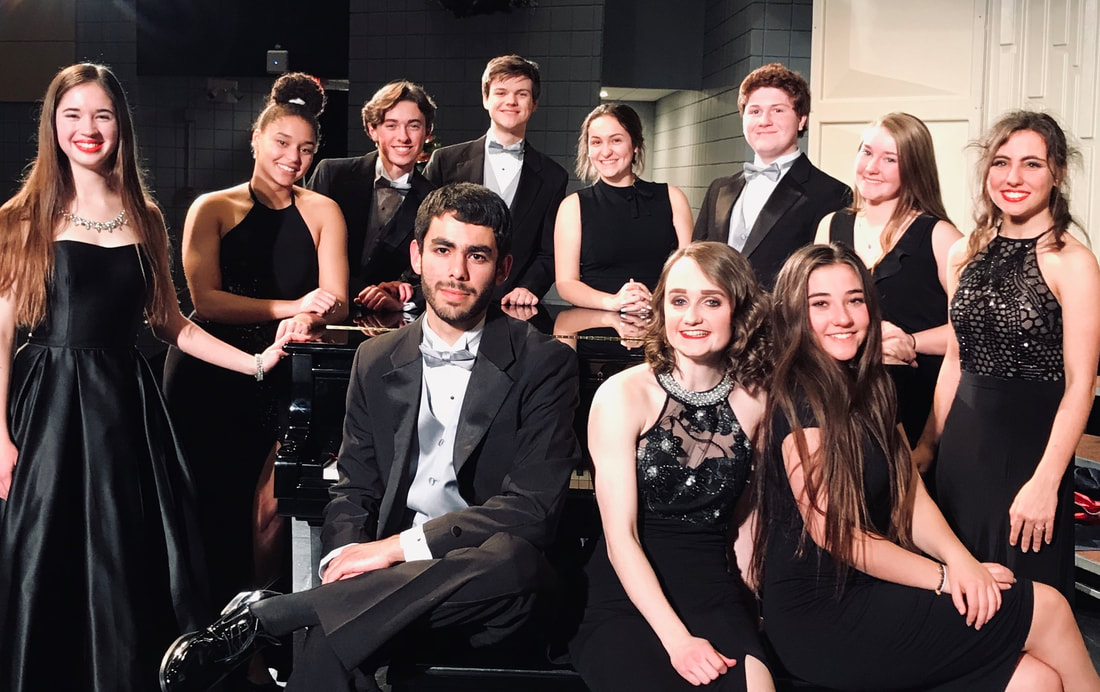 These 11 Olathe North students were selected for the Kansas All-State Choir.  They will represent Olathe North February 22, 23 and 24 in Wichita.

Mrs. Waldron Recognized by 99.7 The Point and 1st National Bank with the First Class Teacher Award.

Dana Baker makes National Headlines.  First ever medal by a US male or Female athlete in the IAAF World Under 20 Championships. 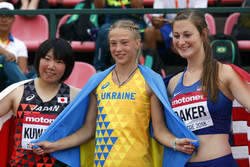 ​TAMPERE, Finland-- Americans added three medals on the second day of competition at the IAAF World U20 Championships, taking a pair in the men’s 100m, and an historic one in the women’s javelin.

Dana Baker’s bronze in the women’s javelin is the first-ever javelin medal for a U.S. man or woman at the World U20s. Baker’s 55.04m/180-7 from the second round was her second-best throw after tossing 55.11 at Javfest on June 29. 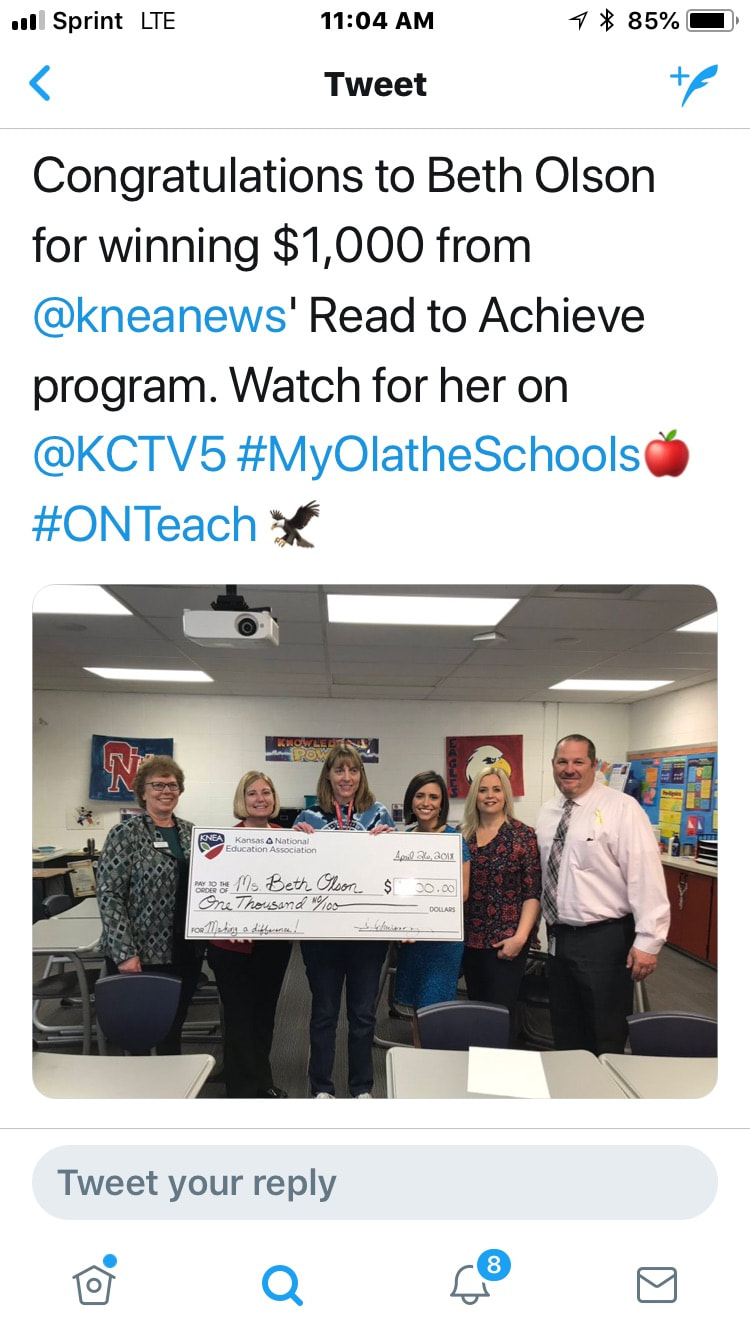 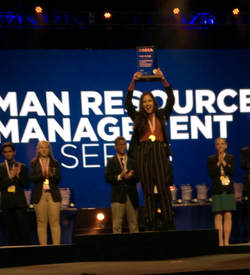 Reem Atallah bested dozens of top qualifiers from every state and several other countries to claim 1st place in DECA’s Human Resources Management!

Olathe North Science Olympiad along with other Olathe District Schools are Successful at the Northeast KS Regional.

In the high school division, Olathe North was 2nd, Olathe Northwest was 7th and Olathe South 12th.  Again these top 3 will likely be invited to participate at the state level, and they earned 27 medals in the top 6th places of events.  The amount of time and dedication it takes for teams to compete in an ever increasingly competitive field is enormous.  The coaches deserve recognition as well as the kids.

Congratulations to Brendan Brownlee, Sophia Palcic, and Khushi Kohli as they won first place in the Math Scramble Team Competition at Emporia State University.   In addition, Khushi Kohli (freshmen) placed 2nd overall in the Geometry Individual Contest.
It was a great day for the Eagles!

The Screaming’ Eagle Marching Band and Eaglettes Dance Team ended their competitive season on a high note at the Kansas Bandmasters Association Championships in Topeka on Saturday! This was the 3rd KBA Championship event, and featured an exceptionally competitive field of the top 22 Kansas bands.  In Preliminary competition the the Screaming’ Eagles earned the Class Champion title and received the caption awards for highest scores in their class for Visual Performance, Overall Effect, and Color Guard (Eaglettes!). The band was in 3rd place overall after Prelims.

In a very chilly Finals competition the band finished 3rd Place Overall and received the caption award for the highest overall score in Visual Performance!  We are thrilled to have added some additional recognition to North in what has been an very successful Fall thus far for many of our athletic teams and activities. A special shout out to our 4 kiddos who marched their rears off Saturday night after having also had a spectacular morning running at the State Cross Country Meet! Thanks to Coach Huseman and Dicus for their support of our kids as well!

These students have worked exceptionally hard through the fall and have shown tremendous growth, and we could not be prouder of the progress they have made! Please congratulate these kids if you have them in class or see them in the hall!

Congratulations to our 3 National Merit Semi-Finalists 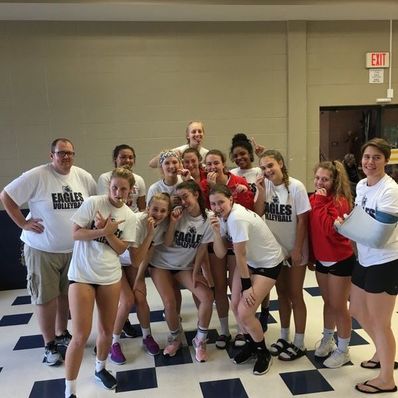 The Olathe North Lady Eagles won the Hayden tournament last week.  Here they are with their First Place Medals!!!!!!!  They went 6-0 on the day! Way to play! The ladies are 14-2 and ranked #4 in Kansas 6A Volleyball.  Keep it up ladies!!!!!

OLATHE, Kan. -- This week's Reaching 4 Excellence young achiever is so talented in so many areas. Olathe North High School senior Shulammite Lim holds a 4.75 GPA, and that's with taking four advanced placement classes.She's so smart that as a sophomore she scored a perfect ACT score, and got perfect SAT scores on the subject tests in physics, chemistry and math. Believe it or not, those accolades are just the beginning of her accomplishments.The 16-year-old is also a top-level violinist. She plays for her school's chamber and also with the Youth Symphony of Kansas City.  She holds the title of Concert Master -- the highest rank obtainable -- with the Kansas Music Educators Association."I feel great.  I can't describe it. Once I start liking something I'll really try to pursue it to the fullest," Shulammite said.Teacher Cecily Mahan couldn't say enough positive words about this week's young achiever.
"She's a teacher's dream. She is so great at everything and she is so humble. She's that talented that she can play better than I can," Mahan said.  She is also a hand-picked member of the National Association for Music Educator's -- National Honors Orchestra.
"November 26th and 29th we'll all be in Disney World in Florida playing violin ostensibly, but probably also going on a bunch of rides," Shulammite said.  But her story is not all sunshine and rainbows; she's had to work hard for what she has. She auditioned for district orchestra during her sophomore year- and didn't get in.  "I realized that I can't assume that I will get into anything without trying hard myself," she said.  She turned what some would consider a failure, into an opportunity. A year later, not only did she surpass that goal, she became the head performer for her division in the state orchestra.  "Open to failure, knowing that it will happen but also still striving for the best," she said.  Shulammite was selected last year in the music for All Honors Orchestra of America. She played with the best students in the nation in Indianapolis. She is also the recipient of a $20,000 H&R Block scholarship.

As reported by Fox4KC.com

Pictures from the Senior Signing Ceremony.